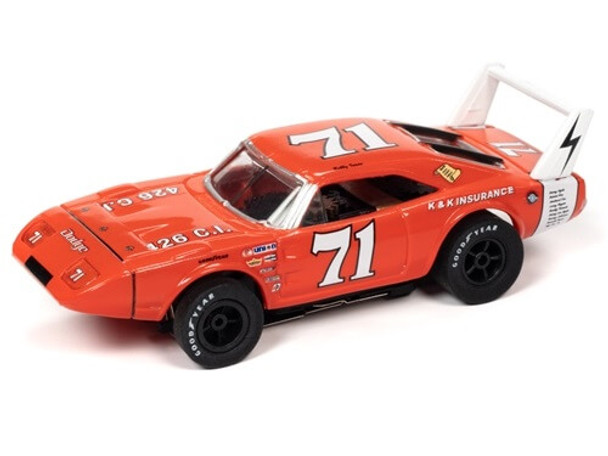 It's time to celebrates the stock car racers of the late 1960s through mid-1970s who helped put NASCAR on the map. These were the brash and over-the-top guys who had one goal in mind which was to win races. Great names like Richard Petty, Cale Yarborough and Bobby Isaac make up the Auto World Release 31 Stock Car Legends HO slot car series. These highly detailed racers sit on the X-Traction chassis which are made to deliver high-speed racing excitement!

Auto World's X-Traction Ultra-G chassis has increased weight and wide rear tires for better traction and handling. A neodymium magnet gives the car its sticking power, and the bodies are snapped onto the chassis using side tabs.

MSRP: $39.95
Now: $33.99
Was:
Cars N Coffee pays tribute to one of the newest car show trends gaining traction nationwide. These are popular events where fellow car enthusiasts gather in the morning hours to sip a good cup o’ joe...

MSRP: $40.00
Now: $31.95
Was:
The funny car heroes of yesteryear are immortalized in Auto World's Legends of the Quarter Mile! These incredible nitro-fueled funny cars will forever be remembered in our "Sunday! Sunday!" hearts...