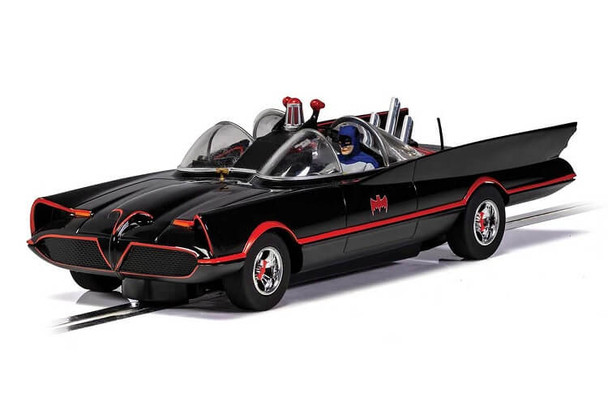 Batman originates all the way back to 1939 where he was first introduced in Detective Comics. Since then, he has grown to become one if not the most famous of superheroes of all time. Batman made it from the comic book pages and onto the TV screen in the 1960’s when the Batman TV series first aired starring Adam West as Batman/Bruce Wayne. Both Batman and his companion Robin where two crime fighters there to defend Gotham City, their mode of transport was the Batmobile.

This detailed Scalextric 1:32 scale slot car of the 1960’s Batmobile captures the shape of this iconic car and offers Batman fans from around the globe the opportunity to take Batman to the track. This slot car comes complete with a detailed Batman figure in the driver’s seat.

MSRP: $44.99
Now: $39.99
Was:
The Ford Mustang GT4 has made a real impact on the 2019 British GT championship. New to the British GT series is Multimatic Motorsports, which has years of experience with Ford in both the...

MSRP: $44.99
Now: $39.95
Was:
One of the most famous and iconic sponsors in motorsport history, Gulf which is synonymous with winning and GT racing. As is Lotus, with the Evora, they have a ready built GT4 contender. In the hands...

MSRP: $44.99
Now: $39.95
Was:
For 2019, the Silverstone based RAM Racing adorned their Blancpain endurance challenger with this amazing art car inspired paint job. Raced at Monza by Tom Onslow-Cole and Remon Vos, the car...

MSRP: $44.99
Now: $39.99
Was:
The new Aston Martin Vantage GT3 has already proved to be a success on the track. With the famous Garage 59 team switching over from a rival manufacturer to run the Aston Martins as a customer entry,...

MSRP: $44.99
Now: $39.95
Was:
Due to a budget crunch, the State of Alabama had to find some very inexpensive police cars that had plenty of performance to catch the bad guys. Well, long story short, the AMC Javelin Alabama State...

MSRP: $44.99
Now: $39.99
Was:
The Optimum Motorsport Aston Martin Vantage GT3 was driven by Flick Haigh and Jonny Adam in the 2018 British GT Championship series with excellent results. Flick Haigh even made history by being the...

MSRP: $44.99
Now: $39.95
Was:
Scalextric did an excellent job of capturing all the details with this Mercedes-AMG GT3 1:32 slot car! This beautiful patriotic paint scheme was raced by the Riley Motorsports Team at the Watkins...

MSRP: $44.99
Now: $39.95
Was:
While it is of course synonymous with racing in the USA, the Ford Mustang also saw some excellent results in the United Kingdom. Irish racer Martin Birrane raced this ex Trans-Am development car in...

MSRP: $44.99
Now: $39.95
Was:
For 2019, the Silverstone based RAM Racing adorned their Blancpain endurance challenger with this amazing art car inspired paint job. Raced at Monza by Tom Onslow-Cole and Remon Vos, the car...

MSRP:
Now: $44.99
Was:
The famous bright green Dodge Challengers were a force to be reckoned with during the 1970 Trans Am series. This number 77 car driven by Sam Posey has all the classic lines that make it not only a...