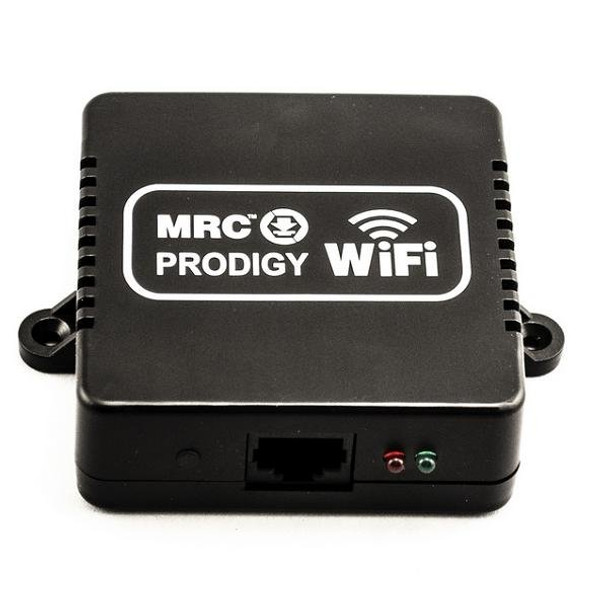 Just plug the MRC module into any handheld jack on your Prodigy DCC system. It creates its own local Wi-Fi network to run your railroad and transforms your smartphone into a wireless throttle. The module acts as an interface between the two most popular smartphone apps: WiThrottle for iPhone, iPod, iPod Touch (available on the App Store) and Engine Driver for Android devices (available on Google Play).

You'll be able to operate your railroad and switches... and more. Depending on which Prodigy system you use, you can:

Invite friends to run on your railroad... all they need to bring is their smartphones. Once the appropriate app is downloaded, each phone becomes a wireless throttle. Run up to eight smartphones on a single module.

The MRC WiFi module had a range of more than 90 feet. And unlike Bluetooth®, the MRC Wi-Fi system will work through tunnels, and isn't impeded by obstacles in the home.

The MRC WiFi module works with any brand loco or any brand decoder. If you are considering buying a DCC system, choose Prodigy and enjoy the wireless smartphone advantages of this MRC WiFi module.

If you presently own a Prodigy Express² or Advance² DCC system, add the benefits and enjoyment of wirelessly controlling your railroad from your smartphone.

Made by MRC and guaranteed for a period of 1 year from the date of purchase.

Note:  This WiFi module is NOT compatible with the MRC Prodigy Elite and Explorer DCC systems.

MSRP: $49.98
Now: $34.95
Was:
The AD520 MRC DCC Auto Reverse Module will automatically change polarity of your reverse loop or reversing section. Easy 4-wire hookup. Up to 5 amp output. Not for use on analog DC model train...

MSRP: $239.98
Now: $159.95
Was:
The MRC Prodigy Express Squared DCC (Digital Command Control) system with it's reliable and easy to use DCC train controls will enhance the enjoyment of your train layout for many years to come. From...

MSRP: $69.98
Now: $49.98
Was:
The Prodigy Computer Interface is for owners of Prodigy Explorer, Express, Advance or Advance Squared which allows your computer to function as a handheld with a cable connection. We call it a super...

MSRP: $459.98
Now: $299.99
Was:
From a beginner's 4x8 layout to a massive club layout, the Prodigy Advance Squared gives you everything you want. It is the first DCC (Digital Command Control) system so brilliantly designed that it...

MSRP: $105.98
Now: $89.99
Was:
This Tech 6 handheld controller plugs into the MRC Tech 6 sound controller 2.0 to give you the freedom to walk around your layout while operating your trains. It also permits the control of up to 6...

MSRP: $99.98
Now: $69.98
Was:
The MRC Prodigy Computer Interface is for owners of Prodigy Wireless or the Prodigy Wireless Conversion Set and allows your computer to function as a handheld with a wireless connection. We call it a...

MSRP: $49.98
Now: $34.95
Was:
The AD520 MRC DCC Auto Reverse Module will automatically change polarity of your reverse loop or reversing section. Easy 4-wire hookup. Up to 5 amp output. Not for use on analog DC model train...