The HO scale model trains offer a huge selection of products that allow you to experience everything model railroading has to offer at a size that is great for around the Christmas tree, a 4’ x 8’ foot layout or even a much larger layout. This allows you the flexibility of enjoying HO scale model railroading now and to expand as your interest grows without having to switch scales.

Getting Started in HO Model Trains

We have spent a lot of time researching and asking many long time HO scale model train enthusiasts questions about model trains and the products available, and the consensus is those that tend to have the most trouble free layouts buy a high quality track and take the time to set it up properly. The track is the foundation of a model train layout, so it is important to get a track that is both versatile and performs flawlessly for years to come. Kato Unitrack is a high quality sectional track with a built in roadbed, and is a very versatile HO track system. One advantage of sectional roadbed track is the ease and speed with which you can be running trains on your layout. You can get a feel for your layout in a couple of hours at most, which allows you to test it and make any changes before adding scenery. Kato Unitrack works equally well on permanent table top layouts and temporary layouts like ones set up on the floor, then taken apart and stored until the next use.

The Kato Unitrack is code 83 (which means the height of the rail is .083 inches) and is made of nickel silver which has excellent electrical connections. This is very important for Digital Command Control (DCC) and/or long layouts to keep the locomotives running properly around the track. Kato HO track is also easy to connect to other conventional code 83 HO scale train track! Simply remove the UniJoiner from the ends of the Unitrack sections that will attach to the conventional track piece. For track that does not have an attached road bed, you can use a piece of trimmed cork roadbed to adjust the rails of the conventional track section to the same height as the Unitrack rails. Connect the track sections together using standard nickel-silver rail joiners.

Here at BRS Hobbies, we make it easy for you to put together a starter set that is customized to your needs which will save you money in the long run since you get the right products the first time.

If you have or are going to purchase a Bachmann HO train set, you have made a good choice. For the more budget minded, Bachmann sets are ideal for setting up a basic track or a temporary layout, like one around the Christmas tree. The case can be made that starting with a Bachmann train set is a less expensive way to enter the hobby, since the sets offer such a great value as opposed to purchasing the items separately. The Bachmann train sets come with steel alloy code 100 track rails, which while being inexpensive, generally require slightly more cleaning and are not as suitable for DCC. If you are planning on going to DCC and/or want a really elaborate track set-up, we recommend eventually switching the track out and replacing it with nickel silver track such as Kato Unitrack. The good thing is that no matter how you start in the hobby, if you go the less expensive complete train set route, your investment is not lost. Since you can still use the included locomotive, train cars and power pack, with whichever track you choose. (If switching to the Kato Unitrack, the Bachman power cable does require splicing the two wires to mate with the Kato Unitrack power cable.). 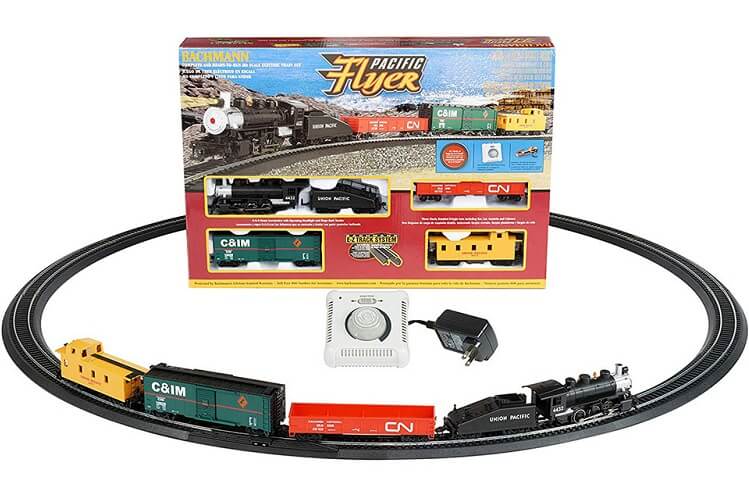 For the more involved enthusiast, the best place to start from scratch, would be to purchase one or more of the Kato HO Unitrack track sets, depending on your available space and budget. The Kato Oval or the WGH track set is great for those just getting started out in HO model railroading and can easily be expanded into a much larger layout in the future.

In addition, to the Kato Unitrack track set, you will also need a power pack, locomotive and rolling stock. The power packs can be analog DC and/or Digital Command Control (DCC). The analog DC power packs are the more traditional power packs that have been used for years. The power pack adjusts the speed of the locomotive by varying the voltage to the train track rails. DCC uses a digital signal to communicate with a DCC locomotive to control it. The main advantages of DCC is it allows more than one DCC locomotive to run on the same track at the same time, can control lighting functions & sounds for those DCC locomotives that are sound equipped and has the ability to control DCC electric turnouts. Here are some options of the different power packs which are all easily connected to the Kato track sets -

Kato DC Power Pack - will operate any analog DC locomotive and any dual mode DCC locomotive (dual mode means it is made to function on both a DCC and a DC powered track). A dual mode DCC sound locomotive will also function with basic sounds on a DC powered track. The Kato power pack also features a DC accessory output for powering Kato Unitrack electric turnouts. This is the most economical way to get started in model railroading and is ideal for those who want to keep it simple. 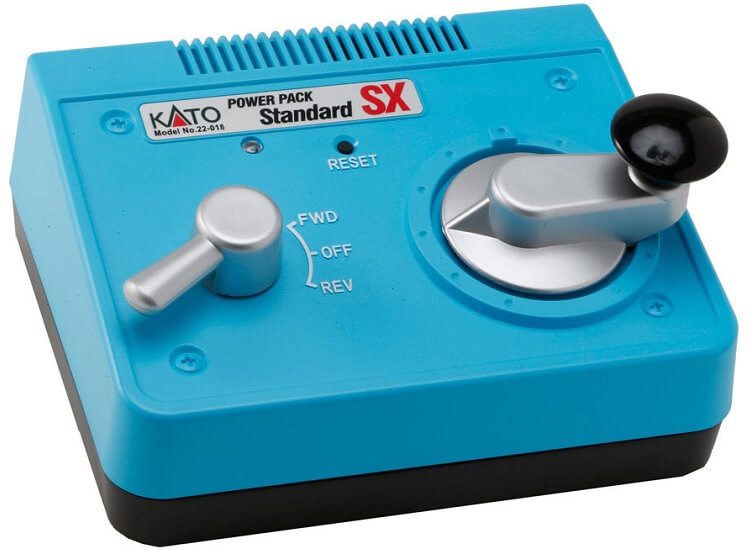 MRC Tech 6 Sound Controller 2.0 - offers two modes of operation, analog DC mode and a DCC mode which allows full access to lighting functions and all the sounds of a DCC sound equipped locomotive. The Tech 6 also supports changing the CV’s on a DCC equipped locomotive allowing you to customize a locomotive's attributes to your preference. The main benefit of the Tech 6 is that it allows you to try DCC without having to go to a full fledged DCC system while still being able to run a conventional DC locomotive. This is a great option if you want to run a DC locomotive on a track, then remove it from the track and replace it with a full featured DCC locomotive without having to change out the power pack. The MRC Tech 6 Sound Controller 2.0 doesn’t have an accessory output so a separate power supply will be needed if any non-DCC electric turnouts will be used on your layout. 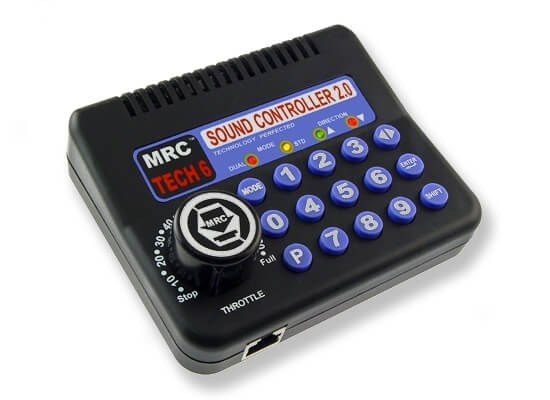 MRC Prodigy Express² or Advance Squared DCC Systems - are full fledged DCC systems that are only compatible with DCC locomotives. For an analog DC locomotive to run on the track, you will need to either switch over to an analog DC power pack such as the Kato Power Pack or convert your analog DC locomotives to DCC using the appropriate DCC decoder. The two main differences between the Express² and Advanced Squared are that the Express² has 1.6 amps of power compared to 3.5 amps for the Advance Squared and the Advance Squared has the ability to control DCC compatible electric turnouts. The Express² can be upgraded (by purchasing additional items) to all the features of the Advance Squared so the choice mainly comes down to your budget. The MRC Express² or Advanced Squared DCC systems don’t have an accessory output so a separate power supply will be needed if any non-DCC electric turnouts will be used on your layout. 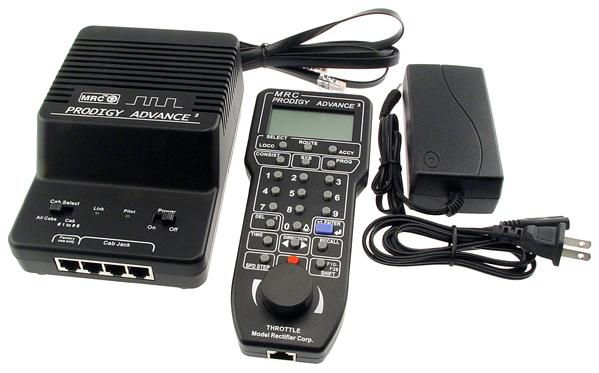 Also, if you are on a budget, and want the ability to run an analog DC locomotive and also be able to experience all the light and sound functions of a DCC sound equipped locomotive, then the MRC Tech 6 Sound Controller 2.0 is a great option. Likewise, the least expensive way to get into DCC and run multiple DCC locomotives at the same time would be to go with the MRC Prodigy Express² which, if desired, can be upgraded to all that DCC has to offer in the future. You can make the case for any of the above products so the best way to go would be to find what features are the most important to you and then go with the product that best meets those needs based on your available budget.

Depending on what power pack you decided on above will help determine, which locomotives will best complete your HO model RR starter set - 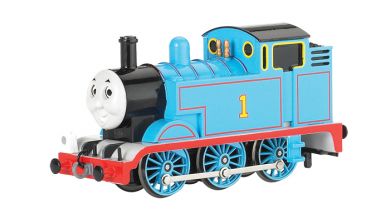 Bachmann - locomotives come in four versions which are analog DC, DCC ready, DCC equipped and DCC sound equipped. The Bachmann analog and DCC ready locomotives are made to run, out of the box on analog DC HO model railroad layouts only. The DCC ready models offer the advantage of being easily converted to DCC layouts with a plug and play DCC decoder with lighting functions but no sound. Many of these DCC ready locomotives can also be converted to DCC with sound using a DCC sound decoder. The Bachmann DCC equipped locomotives will run on both analog DC with lights and a DCC layout with full access to all the light functions.

Atlas, Broadway Limited, Kato & Mantua - locomotives from these manufacturers come in two versions, DCC ready and DCC sound equipped. The DCC ready locomotives are made to run, out of the box on analog DC HO model railroad layouts only but can easily be converted to DCC layouts with a plug and play DCC decoder with lighting functions but no sound. Many of these DCC ready locomotives can also be converted to DCC with sound using a DCC sound decoder. The DCC equipped with sound locomotives will run on both analog DC with lights & basic sounds and a DCC layout with full access to all the light & sound functions. Compatible with all other HO locomotives and rolling stock that use traditional knuckle couplers.

Final considerations on locomotives and rolling stock, the Bachmann and Mantua modern era rolling stock are the best products for those who want durable products for young ones and/or are on a tighter budget. The DCC ready HO locomotives are easily converted to DCC using a plug & play decoder that gives lighting functions but no sound. If you want sound, then it's best to buy a DCC sound equipped locomotive from the factory than trying to add sound to an existing locomotive which may or may not have enough room for a speaker.